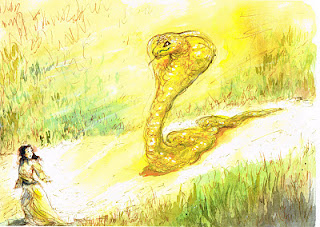 This dream is one of those that I call BIG DREAMS, so it goes without saying that I had to insert it into the first book of FOAL and the Angels ` story.  This dream was so very remarkable not only for the deep, deep sense of sacredness that totally overwhelmed me, but also for the incredible vividness of the colors and the accuracy of the most minute details.

Do such colors exist on Earth ?? … I wonder.

The colors and the sense of Sacred surrounding this spectacular animal, this truly Divine Being made of pure bright gold was a sight to blow your mind away.

In the dream, for some reason, I remember` knowing` that this was no superficial veneer of gold, but it was actually made all of pure solid gold, and this seemed to be important.  Nonetheless, the movements were so fluid like melted gold, and yet solid. Really have no words in my arsenal to describe this, but believe me, it was an  incredible vision.

Since there is little more I can add to what I already said in the book, I shall just copy that chapter here. Again let me say that even if I use the name FOAL, this is my very personal experience and exactly, to the very speck , how I saw it in the dream.

In the last paragraph I dwell a bit on my fascination with the Divine and yet my running away from it.

The beautiful painting is by Andy Boerger, who endeavored so beautifully to make it as close to my dream reality as it could be. Thank you Andy ! It`s been a blessing knowing you !

Foal sees himself in a room sitting at a wooden table with other people .

This huge serpent,which is as big as the biggest Anaconda he could ever imagine, at least 30 yards long, is coming at him again and again, as if he has a special interest in him. The color is yellowish brown, with some faint black stripes. Although it doesn’t look as if it wants to hurt him, Foal feels scared and closes his eyes so as not to see. It is so big ! Just the head is bigger than two rugby balls put together.

As the snake approaches again from behind, Foal feels the big head resting on his neck, just under his right cheek. Foal can feel its bifurcate tongue, darting in and out and touching his skin on his cheek and neck. Somebody somewhere is saying “ It’s alright”, but he is petrified in fear.

Then the scene skips and he sees himself outside running on a big dirt trail . He is on the left side running like mad, and the huge snake is pursuing him several yards back in the middle of the path. Then, all of a sudden, for some unfathomable reason, Foal just feels compelled to stop and look back.

His heart skips a beat … what he sees takes his breath away …! he has never, ever seen anything more beautiful! The huge serpent is in the middle of the path and it is all gold, huge and GOLD !! It is all gold, pure shining gold !!!

Its cheeks are now all puffed up, rather like a Cobra, and they are reflecting the bright gold rays of the sunshine. From the nose to the puffed-up cheeks there are some dark cobalt stripes, which remind him of the golden mask of Tutankhamen .

The serpent is looking right at him, or rather, right into him. His eyes seem to bear holes into Foal`s.  Foal cannot take his eyes off the snake.  He stands transfixed and he has stopped running.

He can see everything, up to the smallest details. He can see the golden muscles rippling under the surface, so strong and supple in their swift bending movement, yet made of solid gold and reflecting the sunlight. He can see the golden hood completely raised and inflated, the eyes exuding and impressing sacredness. The serpent towers over Foal in all his majesty.

A KING COBRA . A GOD COBRA. Like one of those Ancient Gods.  So incredibly beautiful , so sacred .

Foal woke up in an ineffable and liberating stupor.

A flood of understandings overwhelmed his mind. He needed to make sure all was down in paper, in case he forgot, so he grabbed his pen and started to write it all down in a rushed fury. And so he wrote:

“I think it’s the same theme as for the Stag dream .

I am fascinated by the Divine, but I feel so small, awed and overwhelmed by it.

After reaching out, I always try to run away, but It comes after me until I am forced to look at It, to acknowledge It.

I feel scared of such Beauty, I feel that I am not yet ready to look directly into so much Living Light…

But the Divine is not One to let us go easily and comes after us and begs us to look at It.

And as we stop to look, we discover all the Beauty and Love that has been there all along.”

Click on the image to read about Foal and the Angels on Amazon. 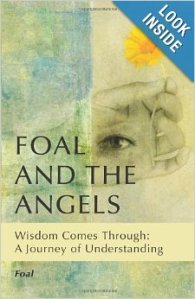 .
Foal and the Angels: Wisdom Comes Through: A Journey of Understanding
http://www.amazon.com

Follow Spiritual Journey of FOAL on WordPress.com
Researchers at Nottingham Trent University are conducting research on the content of Out-of-Body Experiences (OBEs) using an online survey until 9th November 2014 (23:50 GMT). If you have had one or more OBEs follow the link below to the project webpage where the survey can be accessed, thanks –   http://www.obesurvey.webspace.virginmedia.com/surveypage.html